It is not usually the role of a Church to teach the history of a nation.  Since the break-up of the formerSoviet Union, old politics, ambitions, false history and plain imperialism continue to exist and obscure the clarity of Ukrainian history.

This leads to a persistent denial thatUkraineherself exists as a distinct, separate nation with her own identity, history, culture and faith. Successive Russian governments have always viewed the Ukrainian Greek Catholic Church as a dangerous enemy ofMoscow.  To Soviet authorities, this required extreme persecution and even liquidation.  That is why our Church has such a long list of martyrs and even today suffers malice and prejudice, especially in theRussian Federation.

In December 1990, the Supreme Soviet of Ukraine passed a resolution allowing religious groups to register themselves officially with Government offices.  This was seen as a pivotal moment of greater religious freedoms at least in theUkrainian Soviet Socialist Republic. This allowed Ukrainian Greek Catholics to emerge from their decades of forced clandestine existence.  The sheer numbers (in the millions) of Ukrainian Greek Catholic faithful along with hundreds and hundreds of clergy who immediately publicly declared themselves was overwhelming, especially for the Soviet authorities in Moscow.  Faced with these undeniable facts, and even after the collapse of theSoviet Union, Russian civic and religious leaders have continued to claim thatUkrainein fact is only a part of Russian territory and that the Ukrainian Greek Catholic Church has no right to exist and should either become Roman Catholic or Russian Orthodox.  We continue to see signs of this in the turmoil of the politics of modern dayUkraine.

This Russian mindset has its roots in what was once called “Kyivan Rus”.  Rus was established in 880 AD and lasted until 1132 AD when it fell apart because of invasions and political turmoil.  One of the great leaders of Rus was St. Volodymyr the Great, followed by his son St. Yaroslav the Wise.  Rus was the predecessor of three modern Slavic nations:Byelarus,RussiaandUkraine. Russiacontinues to insist that there was and still is only one nation -Russia.

Russiahad its beginnings about 1263 AD and was first called the Grand Duchy of Moscow.  People referred to it as “Moscovy” and it grew in strength and land holdings.

History is what it is.  But it is a long way fromMoscowto Kyiv.  Ukrainians and Russians each have their own identities and cultures.  There is no doubt that Russian Orthodoxy has its roots in Kyiv.  But Kyiv is the mother Church andMoscowis one of its daughters.

Ivan IV (the Terrible, 1533 – 1584) was the first Tsar of Russia and established theRussianStateas we know it now.

When St. Volodymyr accepted Christianity in 988 AD, ChristianChurchesthen were considered to be one and undivided.  The schism of 1054 AD, which is often used as the point in history that saw the Church of Rome and the Churchof Constantinopleexcommunicate each other, occurred more than half a century after Christianity became deeply imbedded into the ruling class of Rus. The word “Orthodox” comes into Christian history in response to the early 4th century Christological heresies; Western and Eastern Churches both use this term.  Later, the usage of “Orthodox” in naming a Christian Church only came into existence after the Fourth Crusade in 1204, when the Western Christian Church blessed the Crusaders and they sacked the city ofConstantinople.  The pillage of the Holy Places of Constantinople at the hands of these Western Christians was so hideous that the citizens referred to the Christians of the West as “Heterodox” meaning that they did not know how to give proper glory to God.  The faithful of theChurch ofConstantinople began to refer to themselves as those who knew how to give glory to God, the true believers and therefore, “Orthodox”.

Deliberate and consistent rewriting of the history ofUkraineand of the Ukrainian Greek Catholic Church creates an impression that the false history is the correct version.  This is a real problem because many people actually believe this revised version of history.  WhileMoscow’s version of history has official state blessings, it does not add up to the truth.  This might be expected from people who would want to eliminate us but at the same time, one must be on the alert for people of presumably good will who through ignorance of the facts repeat this false history and politics and inadvertently think and write in the same negative fashion about Ukraine and the Ukrainian Greek Catholic Church as do the Russians.

Ultimately, Ukrainian Greek Catholics will not lose their history and churches, but we must be ever vigilant against the forces who seek to destroy us.  It seems that the work of informing the world aboutUkraine’s separate identity has a long way to go. 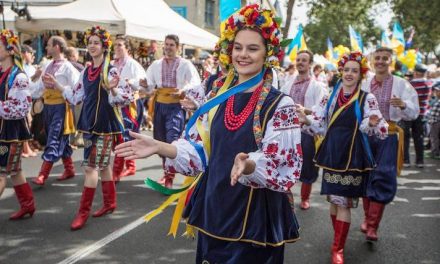