Of the three great religions of the world that spring out from the bosom of Abraham; it is the Christian religion with its teaching of the Holy Trinity that causes considerable conjecture in the hearts and minds of those adhering to either Judaism or Islam. The God of Judaism known as the Tetragrammaton, or YHWH (Eng. Yahweh), is a God Whose name, according to the Jews is so sacred that it should never be spoken…..

The Decalogue confirms that there is only one god who is to be worshipped and that this singularity should never be broken. Moreover Islam, deriving much of its law from the Old Testament, is unequivocal in its support of the theological notion that God is one. The Arabic word for god, ‘Allah’ is a word that specifically means – ‘the deity’, with emphasis on there existing no other than the ‘one’ God. The Qu’ran is also replete with references to the impossibility of Allah having a Divine rival, or for that matter begetting children.

From a Christian perspective, the dispute with the Jews and Muslims over the Holy Trinity can be seen as one of semantic misunderstanding – for whereas the Christians do proclaim a God known as the Holy Trinity – this Trinity is specifically based on there being only One God, yet three Persons to this God; or as St. John Chrysostom proclaimed in his Divine Liturgy: “The Father, the Son and the Holy Spirit, the Trinity one in Being and Undivided”. Each of these Persons has exactly the same Divine nature as the other; thus as God the Father is said to be omniscient, omnipotent, and omnipresent, so also does God the Son and God the Holy Spirit, have these self-same attributes.

Although the doctrine of the Holy Trinity was officially formulated by the Church in the Fourth Century, the rationale behind the belief in a God of Three Persons, is Scriptural; evidenced by Christ teaching His followers to: “’Go, therefore, make disciples of all nations; baptise them in the name of the Father and of the Son and of the Holy Spirit, and teach them to observe all the commands I gave you.’”(Matthew 28: 19). Further still Christ speaks: “’Anyone who has seen me has seen the Father’”; for “’I am in the Father and the Father is in me’” (John 14: 9, & John 14: 10, New Jerusalem Bible).
Yet for both the Jews and Muslims who refute key teachings of Christianity; in the case of the Jews, Christ being neither a great Prophet nor the Son of God; in the case of the Muslims, Christ accepted as a Great Prophet, but not the Son of God, an earlier Scriptural reference can used to highlight the teaching of the Holy Trinity; a Scriptural passage, pre-existing the event of the birth of Christ.

In Genesis, Chapter 18, we are invited into the domestic life of Abraham and his wife Sarah. Abraham and Sarah are both elderly, and the latter has passed through menopause. Now according to Scripture, YHWH comes to Abraham’s home, which is near the Oak of Mamre. (cf. Genesis 18: 1). The arrival of YHWH to Abraham is a phenomenal event; yet there is still more of a surprise indicated in the next verse of this Chapter. It is written that Abraham: “looked up and there he saw three men standing near him. As soon as he saw them he ran from the entrance of the tent to greet them, and bowed to the ground”. (cf. Ibid 18: 2). Notice how YHWH appeared to Abraham, and that YHWH, was three men. Furthermore how does Abraham address YHWH? Abraham speaks to YHWH using the singular form; “My lord, he said, ‘if I find favour with you, please do not pass your servant by. Let me have a little water brought, and you can wash your feet and have a rest under the tree. Let me fetch a little bread and you can refresh yourselves before going further, now that you have come in your servant’s direction.’ They replied, ‘Do as you say.’” (cf. Genesis 18: 3 – 5). Abraham addresses YHWH singularly – and, ‘They’, the three persons reply in unison; although They are three – They act as one. Clearly Abraham is having a meeting either with the Holy Trinity, or with a prefigurement of the Holy Trinity.

The Russian iconographer, Andrei Rublev (1360 – 1430) is best known today in the west for the icon that he wrote, titled, The Trinity (ca. 1410 – Please note that icons are said to be written and not painted; as they are not art, but a visual prayer, expressing a religious message). Rublev’s icon depicts the event of Genesis 18. Having initially written both Abraham and Sarah into the icon, Rublev later removed the spouses in order to have the person contemplating the icon, place their concentration on the Mystery of the Holy Trinity rather than on the promise made to Abraham and Sarah.

So what can be read from this icon? Each of the figures are seated around a table. Each person is wearing a blue garment, symbolizing the heavens. As we gaze at the icon in order from left to right, they are seated according to Scriptural order of procession: God the Father, God the Son, and God the Holy Spirit. All three figures are blessing a chalice – and all are carrying staffs, symbolizing their divinity. The monk, Gregory Krug, in his work Thoughts on Iconography, continues on in his analysis of this icon, by saying that the first figure dressed in a blue under-garment and purple outer-garment, symbolizes the Father in His unfathomable nature. The tower near His head represents that He is the pillar and fount of creation. The demeanour of this figure, head un-bowed, indicates his fatherhood. The other two figures look toward Him. The second figure, is wearing a crimson outer-garment, a known symbol of the Incarnation. The tree behind Him symbolizes both the Tree that stood in Eden, as well as the tree upon which Christ was crucified. The third figure is dressed in a light green outer-garment, green being the colour of new life, and in the Eastern Churches, the official colour of Pentecost. The mountain above this last figure’s head indicates purity. The common under-garment of blue also refers to the co-equality, co-eternity, and consubstantial nature of all three Persons of the Holy Trinity.

Rublev’s icon is an attempt to have Christians both consider and affirm one of the most important tenets and mysteries of our belief – that the God of Christianity is a Trinity of Divine Persons, a deeply relational expression of Divine Love – a Love to which we are all invited to partake in. The Holy Trinity should not be considered to be the ultimate conundrum, something understood, for this is quite impossible – but rather we should leave our intellects quietened for a moment and like Abraham, welcome God into our homes, setting three places for Him at the one banquet table that is our prayer. 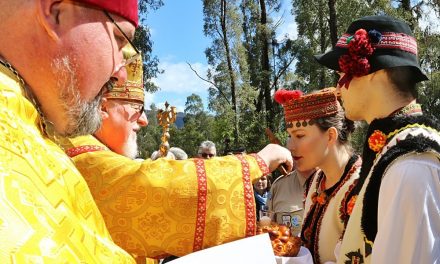