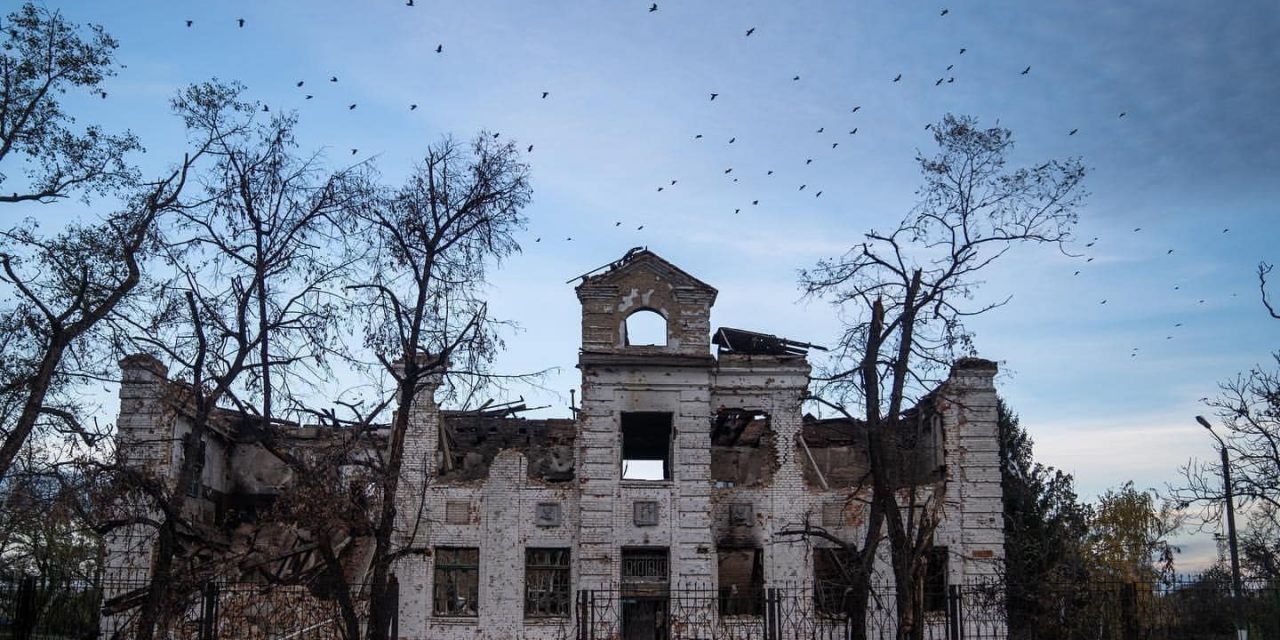 This piece is dedicated in part to the unknown individual who wrote on the wall of a torture chamber in Balakliya the words of the Lord’s Prayer, and to all those who for want of having a writing implement wrote the words of Christ on the air they breathed in their dark cells. The Ukrainian forces after liberating the town in September 2022 from the Russian invaders discovered this chamber and others like it. The Balakliya chamber is emblematic of the struggle of the Ukrainian people. A darkness pervades the nation, be that darkness the shroud of sorrow or the cloud of smoke, or the pall of doubt – but can we who have our freedoms lose hope when brothers and sisters carve on to prison walls the words of Our Saviour? Does this not prove that even in darkness – light shines, and Truth conquers. For as Christians we all must face Good Friday – but Sunday morning is near at hand, and we walk by Light and Hope. God be merciful to Ukraine! Glory to Jesus Christ! Glory to Ukraine! ATK

The dawn of the motion picture industry brought the modern man and woman to a vista unknown to the generations that preceded them. Movies can take the viewer to places real – that they have never seen, first hand; as well as to places that exist only in the imagination of one mind – the movie director. Yet for all of their benefits, movies due to the constraint of time, can reduce great works of literature to an abridgement chosen by a singular mind, who considers only certain aspects of a great work to end up on the ‘big screen’. Such has been the case, sadly, for Alexandre Dumas’ work: Le Comte de Monte-Cristo, 1844–46, (English translation – The Count of Monte Cristo). Most people are aware of a number of small and large screen adaptations of Dumas’ story – but none of them do his work justice. The novel in its English translation is nearly thirteen hundred pages long. This is the primary reason that the story is reduced to ‘action’ rather than to an exploration of deeper meaning.

In sum, the early part of the story runs as follows: It is early 19th Century France, Edmond Dantes is imprisoned by a fabrication sculpted by a group of individuals each of whom wants something belonging to the young man: one man seeks his fiancé, the beautiful Mercedes, another his promotion as a sea captain, another to use him as a smoke screen to protect the dubious honour of a family. Subsequently Dantes is cast into the Chateau d’If – an island prison. There Dantes remains in a dark cell – alone, apart from the guard who twice daily brings him a paltry meal. One day Dantes hears tapping on a wall – and eventually discovers that in a nearby prison cell is the Abbé Faria, an educated and once socially prominent priest. The two men dig toward each other and in time – their tunnels meet. Dantes and Faria enjoy conversations over the course of years – as they seek to plan an escape. A botched escape will of course lengthen their prison terms. This part of the story has of course been depicted on film. But what has never graced our screens is the morally laden discussion these two men have while planning their escape to freedom. Faria quizzes Dantes on the many avenues by which they can get out. Dantes gives ample suggestions; but then the discussion becomes oblique. Both men know that there exists a real means by which to escape –one they have always known. Each day that the guard brings the meal to the cell – and removes the other tray, is an opportunity for an escape. ‘All’ a prisoner has to do is kill the guard and dress as the guard and walk out with the keys. That is ‘all’ that needs to be ‘done’. Faria puts the question to Dantes, and intimates why neither has chosen this route of escape. The answer is obvious – because in order to do so, the ‘escapee’ has to murder a man, who is in fact only keeping guard. The guards are not corrupt individuals. It is this inherent moral understanding that excludes this means of escape from both Dantes and Faria’s planning. Would they kill an innocent man to obtain their freedom? Self-defence gives one the right to take a life, if one’s life is immediately threatened by an aggressor. But this is a grey area – the guard has not condemned them to prison. Dantes and Faria reason that the guard’s life is as sacrosanct as their own despite Dantes and Faria being in gaol. If Dantes and Faria were to kill the guard, very few in the outside world would know. The Chateau d’If is a secluded island, and both men are all but forgotten by the outside world. What restricts their actions is that they both understand that the world is governed by a knowing God – the Unseen Seer; who in the end will judge them. There is no dilemma for both these men in wishing to escape from the prison; for they do not recognise the authority of the justice system to imprison innocent men – which they are. As St. Thomas Aquinas teaches – no earthly authority needs to be obeyed that contradicts both the Divine and Natural Law; and a crime against the innocent, as Scripture teaches us, cries out to God for Justice. (cf. Genesis 4: 10) [By extension of this argument – it is far better for the Russian citizen to travel abroad and by so doing avoid being drafted so as not to be placed in a situation where you are ordered to kill an innocent. Better still, is that a corrupt government be overthrown, so as to cease the orders to contravene Divine and Natural Law. In the first case, by crossing the border, you protect yourself from physical and spiritual harm, in the second case you risk your own life in helping to bring an end to moral evil].

This excerpt from Dumas’ novel speaks to the heart of the notion of conscience – what some people are willing and prepared to do, and what others consider to be illicit. Dantes eventually escapes. Thought dead – he comes back, in the guise of the Count of Monte Cristo; armed with the knowledge of hindsight and the wisdom taught to him by Faria.

The Catechism of the Ukrainian Catholic Church – Christ Our Pascha (2016), teaches the faithful on conscience, that: ”One of the active manifestations of the heart is a person’s conscience. The term “conscience” comes from the Latin conscientia (joint knowledge). Similarly, the Ukrainian term sovist comes from the Church Slavonic so-vidaty (to know jointly). Conscience involves not so much the knowledge held by an individual, or some kind of “subjective truth,” but joint knowledge with the Divine Persons for the purpose of joint action with them …”. (Par. 750)

What is important in this extract is that conscience is not an isolated part of the human person, belonging to them alone – it is relational, between the individual and God. Conscience is in fact a veritable Chapel where men and women engage God throughout their life. It is a sacred place in each human person. It is a Divine mark – that separates the human from the beast; what the 19th Century English Cardinal, John Henry Newman describes as the ‘aboriginal vicar of Christ’ in the individual. By this Newman means that conscience speaks with Divine authority. This is a vast distinction to what the secular theorists of conscience intimate – that conscience is the freedom to act as one sees fit. Conscience in the Catholic sense, can make a person act contrary to base desire but according to a higher purpose. Dantes and Faria want the air of freedom, but not at all costs, and certainly not at the cost of an innocent man’s life.

The death of Blessed Fr. Omelian Kowch at the hands of the NAZI regime during World War II is a profound case in point. A Ukrainian Catholic married priest, Kowch sacrificed his life by attempting to rescue 600 Jews from the Germans. When arrested, and imprisoned for so doing, Kowch was provided with an opportunity to be released from the Majdanek Concentration Camp at the behest of his family. But as is written in the 2002, Church of the Martyrs: The New Saints of Ukraine, Kowch responded back to them: “I understand that you are trying to free me. But I am asking you not to do anything. Yesterday they killed 50 people here. If I were not here, who would help them to endure these sufferings? I thank God for his kindness to me. Apart from Heaven, this is the only place I’d like to be. Here we are all equal: Poles, Jews, Ukrainians, Russians, Latvians, and Estonians. I am the only priest here. I couldn’t even imagine what would happen here without me. Here I see God, Who is the same for everybody, regardless of the religious distinctions which exist among us. Maybe our Churches are different, but they are ruled by the same all-powerful God. When I’m celebrating the holy Mass, everyone prays… Don’t worry and don’t despair about my fate. Instead of this, rejoice with me. Pray for those who created this concentration camp and this system. They are the only ones who need prayers… May God have Mercy on them.” (p.16) Fr. Kowch’s decision is incomprehensible to those who live and die on the basis of instinct alone – survival of the fittest. Common sense would teach that if the gate be open – why not walk through? But Fr. Kowch had pastoral responsibilities; if he walked, or more correctly ran, and left the most vulnerable to die and suffer, with no face of God in the darkened cell, other than that emblazoned on their hearts, he would be abrogating his conscience.

The understanding of Conscience in the Catholic sense, requires formation, and recollection of both Natural and Divine Law held in a loving conversation with God.

One cannot excuse oneself in doing moral evils by feigning ignorance. A deliberate act against the formation of conscience – is sinful. Formation of the individual conscience is not just the responsibility of the person, Church, and Family – but of wider society, through media and the educational institutions. Propaganda, and the spreading of lies and half-truths – effect the ability of people to make correct moral decisions – and it is to this point we now go in this series; the ability of governments to create false narratives, and by so doing warp the hearts, minds and souls of citizens, and within this process – deform consciences.

In order for Russia to have invaded Ukraine, a lie had to be created for the majority of Russian citizens to believe that invading a sovereign and peaceful people was a moral good – and as we shall see, the notion of telling Big Lies to appease the collective conscience in order to conduct large crimes against humanity, has a terrifying precedent to consider. 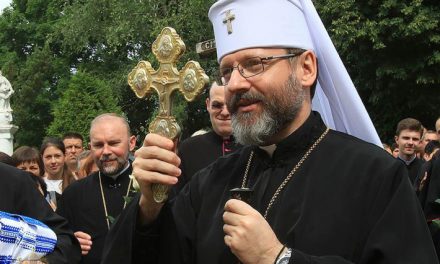 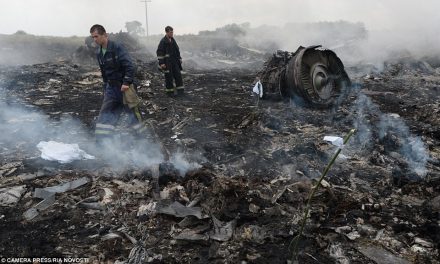 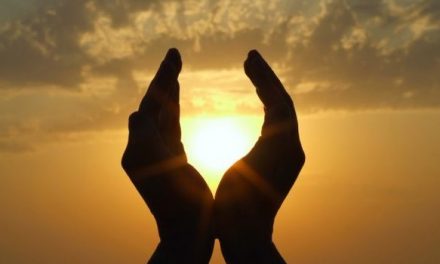