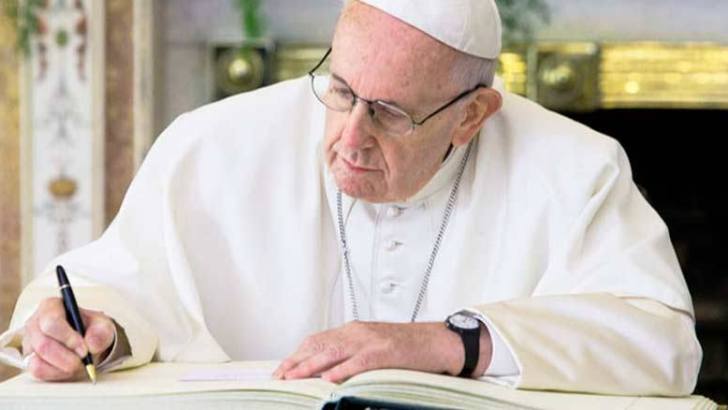 Over the last few hundred years, various Popes have written many encyclicals. An encyclical is a pastoral letter written to the faithful of the church on any given topic. They are letters which present authoritative instruction, much in the line of Luke 10:16 where Jesus says, “He who hears you, hears Me”.

I am a bit surprised that even during these times of Covid 19 restrictions, I am hearing some criticism of “Brothers All”. Certainly in the media, but also in person. Most of this concerns the Holy Fathers view on politics. The Pope is not a politician. He is a Christian Leader. The Pope says that this is a social commentary on the world today. He looks at the world, not from the point of view of any one country, but from the point of view of the scriptures, the teaching of Jesus Christ, and the church. No one person can change the world, and so the Pope is asking all of us to have a think about what he is saying.

Basically he is saying that there is an urgency for all of us together, to drop all selfishness, personal and local protectionism, and isolation. We should instead reach out to our neighbours, those close and far away.

He says that social friendship builds a better and more just and peaceful world.

He makes the point that the current pandemic teaches us that “no one can face life in isolation”. Now is the time to realize that we are actually a one world human family and we are all “brothers and sisters”. The lack of this realization shows up, in various forms, all of them scary! For example the “deformation of democracy, freedom, justice, loss of meaning in the community and history”. There is a misunderstanding of what profit is. There is a culture of waste, unemployment, racism, and poverty. The Pope complains about modern slavery, trafficking, subjugation of woman, proliferation of organized crime and isolationism of people and nations.

Pope Francis reflects on the biblical, “good Samaritan” where the world fails to recognize who is our neighbour, carries prejudice, personal interests, and historic and cultural barriers. The Pope is only emphasising much of what Jesus spoke in the gospel.

People may be suspicious of what the Pope is saying in this encyclical, but after the huge explosion in Beirut recently, we saw in television reports, the young people of Lebanon demanding “a better kind of politics” where the government would be in the service of the common good and would be more open to dialogue with the people. The Pope must have been listening to the people of Lebanon. I did. It is good to know that the church does take a world view and is genuinely concerned about our common future.

I encourage you to read the entire encyclical by downloading the Brothers all from the internet.

It is a big problem to be too busy for God