Bishop Elect Mykola Bychok “No matter where I have been, I have always met holy people” 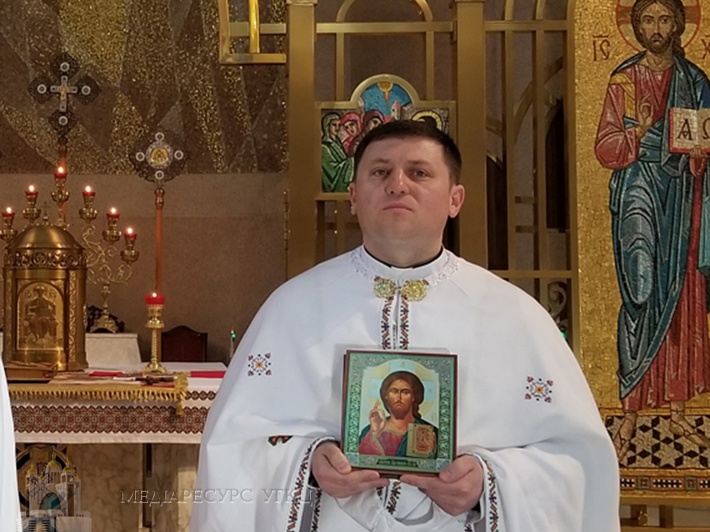 On the 15th of January, it was announced that the Roman Pontiff had confirmed the election of the Synod of Bishops of the Ukrainian Catholic Church and nominated Fr. Mykola Bychok as the Bishop of the Eparchy of Sts Peter and Paul of Melbourne which encompasses the whole of Australia, new Zealand and Oceania.

Fr. Mykola who joined the Redemptorist fathers as a young man first ministered in Prokopjevsky, had worked with youth and has undertaken a number of pastoral and administrative functions in his order as well as serving in Newark. This is a short interview that reflects on his service in Siberia and USA, about his reactions to being nominated a bishop and his first thoughts as to his priorities in serving in Australia and New Zealand.

What were your feelings on being informed of your appointment to Australia?

The election by the synod and the confirmation by the Holy Father was a great surprise. His Beatitude Svyatoslav informed me of the decision of the Synod and Holy Father and he began with the words “I bring you news of great joy? – do not be afraid”. At first, I was speechless and could not even express with words what I was feeling. I had many questions; why me? What if I am unworthy? Can I take such a huge responsibility? To be honest, a great sense of fear deep in my heart. I asked for a number of days to think it over, and these were some of the hardest days of my life. I eventually agreed. Accepting this of our church in Australia, the knowledge that I dd not choose but was chosen, that it is the Lord that is sending me I have the Synod for the good of our church and our faithful. My inspiration came from the history of our congregation of Saint Alphonsus Liguori. On the 9th March 1762, when St. Alphonsus was 66 years old, a delegation from the Nuncio announced to him his appointment as the Bishop of St. Agatha di Gori in Italy. St. Alphonsus at first declined the appointment saying that he was too old and frail but when the delegation returned a second time with a personal request from Pope Clement XIII he replied with these words “God wants me to be a bishop, so I want to be a bishop”.

As the youngest bishop in Australia, I have also been strengthened with the words of St. Paul to Timothy, the first bishop of Ephesus, who was around 40 at the time of his election. “Do not let anyone look down upon you because you are young but set an example to people in speech, in conduct, in love, in faith, in purity. Until I come, devote yourself to the public reading of Scripture, to preaching and to teaching”. (1 Timothy 4, 12-13)

Now that the dust is beginning to settle on this announcement, I can more clearly express my feelings. I feel a gratitude to God, to people. I am grateful to the Redemptorists with whom I have lived most of my short life. This congregation has given me everything in good times and in difficult times. I thank the parish of St. John the Baptist, all the parishioners who have helped the community to grow spiritually and materially. I expressly thank my confrere and superior Fr. Taras Swirchuk. I also thank the Philadelphia Archeparchy where I have worked for the last 5 years, Metropolitans Stefan and Borys, the priests with whom I have served and the faithful whom I visited and got to know.

Tell us of your experience serving in Russia. What has this experience taught you and how will this help you in your ministry in Australia?

Immediately after my ordined in 2005, the Provincial Council sent me to serve in Siberia in the town of Prokopyevsk in the Kemerovsky region where in 1959 the Redemptorist Fathers had a mission.

Some time earlier, I served as a deacon there. I was very happy to serve the people as a missionary, to do that which is a part of the Redemptorist Charism. The faithful who belonged to the parish of the Mother of God of Perpetual Succour and those of nearly 10 missions, some nearly 300 kms away had lived through a lot of suffering. They had been deported to Siberia but remained faithful to their traditions, culture and faith. I was captivated by their stories, how in the 1960s + 70s, at a time when the Ukrainian Church was persecuted they were not afraid to sing carols, to process with the nativity play and jokingly say “Where could they possibly exile us now?” It was however frightening because they would still arrest priests, yet the priests still ministered to the people despite the dangers. They served in homes and apartments; they only built a church after the collapse of the Soviet Union.

We served in the eastern Rite for Ukrainian Greek Catholics and in the Latin Rite for Roman Catholics as there were many Germans there who had been exiled.

I always tried to work with youth and children, in summer conducting camps. We always chose beautiful places so that children would appreciate not only the beauty of the spiritual life but also beauty of nature. Our camps were always successful, but even after the camps, they were seldom in church! Maybe at Christmas and Easter. I, as most priests, felt rather disheartened by that because our efforts seemed to result in nothing. It was difficult to get the youth and children to church because they did not have the Christian upbringing, they did not have the example of parents, and no matter how hard we tried over a week or month at camps our efforts did not have support at home. So, in general only the older people came to church sometimes with their grandchildren. I was taken aback that those people who were brought up in the Soviet system hardly spoke Ukrainian, even though people in Canada, America, Australia sometimes speak Ukrainian even in the fourth and fifth generation.

Our parish also worked closely with the local Caritas, we visited those afflicted with AIDS in the central hospital, which was near the church, over time we were given a room for our pastoral work. We were often called to minister to the dying, especially to young people. Together with Caritas we looked after a Women’s and Children’s home for AIDS patients. This was an experience of looking after the most neglected – an example of the calling of St. Alphonsus to minister to those in greatest need.

They have something in common. In Siberia there was never enough material support. It was like seeing people living in the 18th century, in very humble circumstances but most striking was the spiritual neglect. In America there is much more wealth, but you can also sense a spiritual neglect. Our parish of St. John the Baptist in Newark has a huge church – 800 seats. It was built in 1965 to serve the needs of a large and active community.

At the parish school we had 500 students. At that time, many Ukrainians lived near the church and they would come in their thousands. But over time that changed for various reasons but mainly due to the suburb becoming somewhat dangerous, Ukrainians began to move away. There are still some who live close to the church, but the majority come from further away. Some travel 50 or even 100 kms to come to church. On Sunday we have 200-300 people. Most of our work takes place on Sunday. During the week our parishioners work. We don’t see them. This is a challenge. We undertake a Catechetical instruction and have a Bible class, we visit people at home, at the moment with the Jordan water blessing. In America, these visits with Jordan water are truly “pastoral” not like sometimes takes place in Ukraine, that the priest can’t manage to find enough time because there are so many to visit. We have the time and we truly appreciate the opportunity to be with the people, to hear from them about what pains them and to try and find answers to their particular situation. Much like the people of Siberia they are hurt that their children fall away from the church.

But it does not matter whether it is in Siberia or America, I have always encountered holy people who have complicated lives, experience difficulties and suffering but who know how to live a spiritual life, never forgoing Sunday Liturgy even when there is a huge now storm or other difficulties. The are a great example and encouragement for me. They treasure their personal relationship with Jesus Christ. This encourages me to work.

It is early to speak of plans, but what are your early thought about your future ministry in Australia?

I received the news of my appointment at a time when the whole world was shocked by the news of the fires in Australia. In the spirit of solidarity, I prayed with the world for the people who suffer. This is my first relationship – uniting in prayer for the country in which I will serve and for the people that suffer.

I have never been to Australia. I have heard about it from my confrere Fr. Ihor Kolisnyk and from Bishop Peter Stasiuk with whom I have spoken a few times when he visited our monasteries in Ukraine. Therefore, my first will be to get to know the people, to discover their wisdom and understanding of their country. I want to hear and understand my faithful.

From my previous pastoral experience I know that a priority will be working with youth and children for this is our hope and future of the church, I also need to make an effort to make close contact with the priests and sister who are the first co-workers of the Bishop.

What sort of Bishop will strive to be?

Firstly, I would like to remain a simple man, that the hat with a cross that is called a mitre will not change me, I want to be open to the people. I desire to be a man of prayer and an example to priests, religious and people. Pope Francis has said on more than one occasion that a bishop must “smell of the sheep”. We have to be close to the people to their problems and sufferings. To be with them as a friend in moments of joy and in difficult times. 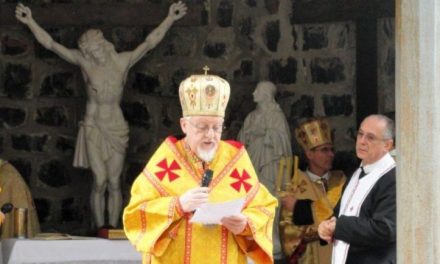 Pastoral Letter of the Synod of Bishops UCC 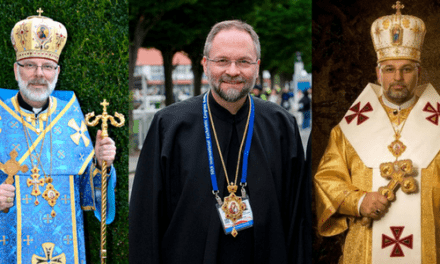 We are expecting guests 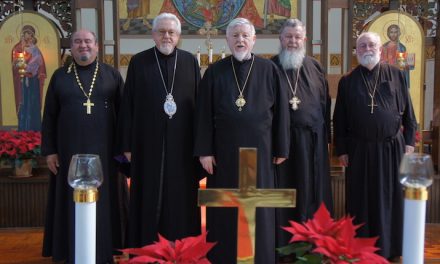