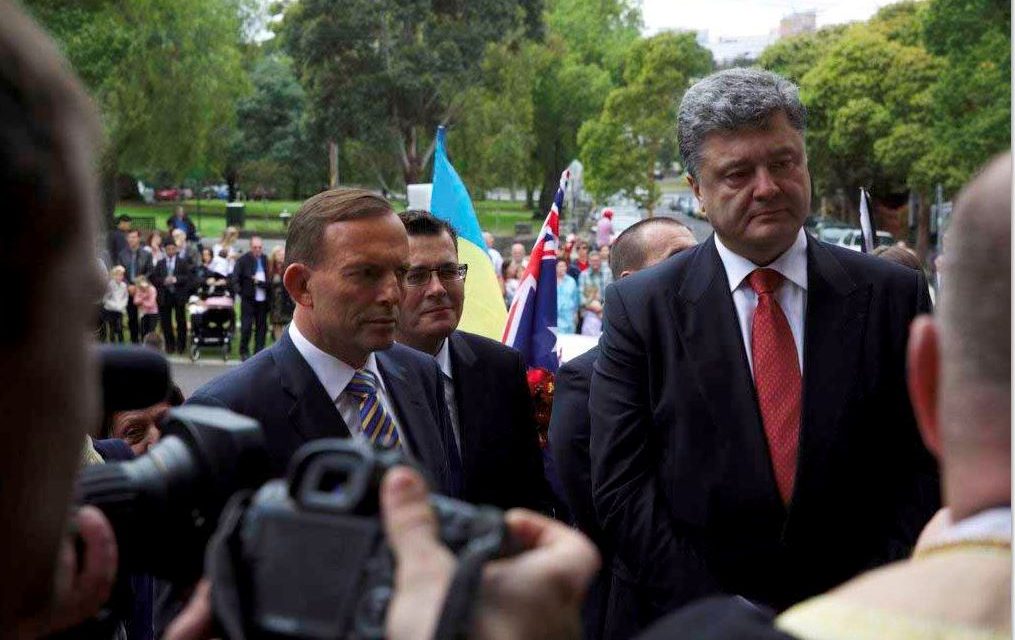 The President of Ukraine Petro Poroshenko arrived in Australia for a State Visit and Visited Ukrainian Catholic Cathedral in Melbourne 11-th of December 2014 was been a remarkable occasion for the Ukrainian community in Australia.

For the first time the . On Thursday 11-th of December at around 11 a.m. the President of Ukraine Petro Poroshenko with his wife Mrs. Maryna Poroshenko, the Prime Minister of Australia Tony Abbott and the Premier of Victoria Daniel Andrews came to the Ukrainian Catholic Cathedral of Saints Peter and Paul in Melbourne. A large number of Ukrainians that live in Australia came to this unusual event to welcome the presence of the Ukrainian President on the Australian soil.

Bishop Peter (Stasiuk), Eparch of the UGCC for Ukrainian Catholics in Australia, New Zealand and Oceania, and Very Rev. Vasyl Kasyan, a priest of the Ukrainian Orthodox Church greeted the esteemed guests before they entered the Cathedral. The event began with prayers for peace and unity led by the clergy of the Ukrainian Catholic Eparchy and Ukrainian Orthodox Church. Thedignitaries and a large Ukrainian community participated. Prayers were also offered for the innocent victims of Flight MH 17 which came down in Ukraine, for the Ukrainian people and for the people and governments of Australia and Ukraine.

In his address the Ukrainian President appealed to all participants and thanked Australian Ukrainians for their support in the struggle of the Ukrainian nation for freedom and independence.

The President said that today in Ukraine it is not an anti-terrorist operation but truly a War where Ukrainian people struggle for freedom both in Ukraine and in the world. Peter Poroshenko thanked his friend Tony Abbott for his brave support of Ukraine in particular for his solid appeal at the previous meeting of the G20 that was held in Brisbane in November. The president also said that today Ukrainian people both in Ukraine and around the world became united and atone in the common cause for peace in Ukraine for the first time in the last 23 years.

He noted that Ukrainians never before were so united as today during the last 23 years of Ukrainian Independence. Today if Ukrainians gather anywhere you can hear them sing the Ukrainian national anthem. If you go around Ukraine you will see many national flags which was not the case previously. The Ukrainian nation has a close relationship with Australia now even though Australia geographically is one of the most distant countries in the world from Ukraine; Australia is closer than the Russian Federation. The President thanked Ukrainians in Australia for preserving the Ukrainian culture and language and for not forgetting and always supporting Ukraine in this hard time.

The Prime Minister of Australia Tony Abbot then delivered his address. He assured everyone that the Australian Government would cooperate closely with the Ukrainian Government and would support Ukraine further. He also thanked the Ukrainian President for his visit and assured him that Australia will continue to help Ukraine in its struggle for justice, democracy, values and a peaceful life.

The last address was given by the Premier of Victoria Daniel Andrews. The three heads of state each lit candles as sign of remembrance for the deceased passengers of the MH 17 flight. Finally, the Ukrainian community sang the prayer for Ukraine «O God, great and only» and national anthem of Ukraine. 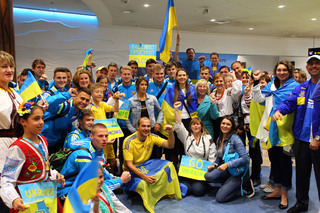 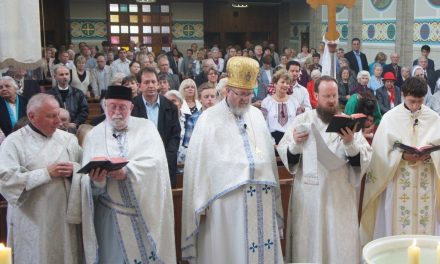 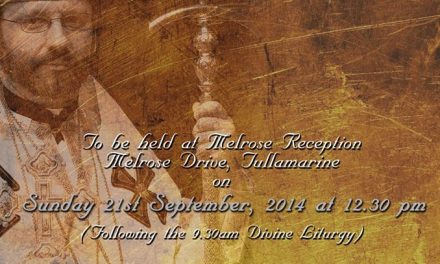